How Far We Fall

This is the third psychological thriller from the author of the bestselling The Daughter. In this moody, Macbethian tale, we meet Beth, who’s just married Albie, an ambitious, talented neurosurgeon.

But Beth is keeping a secret from him. Albie must never know she once had an affair with his boss, Ted, nor the reason that it ended. When Ted threatens everything Albie has worked for, his treachery ignites a passion for revenge in Beth.

She sees an opportunity to satisfy Albie’s ambitions and satisfy her own desire for revenge.

But how far will the fall take them?

With impeccable writing, evocative descriptions and layered plotting, this 5* Macbethian-esque novel has a unique, modern twist. Set in the world of neurosurgery, this is a thoughtful thriller that addresses themes like animal testing, revenge, betrayal and infidelity…

When I want to develop an idea I use pad and paper and the very beginning – the seed is a box in the centre of a page containing the central idea or the name of the protagonist. Then I draw radiating lines to help me brainstorm all the characters which connect to the main one – in concentric circles. So, close family, friends, beyond that work colleagues, then acquaintances. People in the past may be further out or even closer in. Anyone who may be a threat gets a different darker colour. I connect the groups and often end up with a web, which is a good metaphor as this is how my ideas are caught – like flies in a spider’s web.

My passions are reading and walking. I’ve read hugely all my life and in the medical years whether studying for exams or returning late after an in-call session I would have to read more of whatever novel was by my bedside before I could sleep. It’s the same now. Also walking – out in the green peace of the countryside or even in our city’s parks I can shut off the world and let my ideas for a story or character flow.

If I wasn’t a writer I’d still be a doctor. I was extremely happy as a GP. It was a fantastic job and a huge privilege to be trusted by people who were facing sometimes the most crucial times for their lives. However, when it came to developing my writing career I realised that in the evenings after work I was spending more time with my writing than with the latest medical research and I knew it was time to make the swap.

You worked as a GP, married a neurosurgeon, and brought up five children before moving on to writing. What inspired you to make the move, and how do you think those experiences shaped you as an author?

In General Practice you listen to stories all day; my husband’s job as a neurosurgeon is a place of great drama and interest. I chose that as a setting for How Far We Fall as it gave me a battle ground, life and death and a place where the ambitions of brilliant men and women sometimes collide.

What is your favourite book you’ve written? Why?

Always the one I’m writing – it’s the one I dream about at night.

I read Michael Ondaatje’s The English Patient again and again trying to find how he slips so silkily between tracts of time; the latest Booker winner as that is always a great treat and provides so much to learn from; and probably Anna Karenina, though I’d have to swim to another island in search of more when I’d finished those.

How had being a bestselling author changed things for you? Do you still write the same, or is there more pressure now?

It was unexpected and wonderful and I still find it hard to believe. The Daughter was the first book I wrote so it didn’t change things, as I wasn’t a writer before, though I was very aware of how lucky I was. On a deeper level though it hasn’t changed the way I think about writing or the drive to try to write the best book I can, which is a horribly slippery and elusive goal.

Writing How Far We Fall

Let’s talk about How Far We Fall. I love how it’s like a modern twist on Macbeth. What made you decide to write the story this way? Where did the idea came from and what inspired you to write it?

The seed was sown years ago when I read Macbeth for English A level at school. I was, and still am, fascinated by the journey of a moral man – someone who would dare do anything for his countrymen who became a man who would dare do anything for power. We still root for him, though, even as he steps further into the shadows. Shakespeare showed us this man in all his complex humanity and that is what held me.

I found the perfect setting in my husband’s place of work – neurosurgery. I went to watch him operate and was blown away by the intensity, the skill and the endurance. I gave up after six hours and I was sitting down. I tried to capture some of that in the book.

I loved reading about Beth and Albie, their spiral into danger. Where do you find inspiration to create such compelling characters?

In my experience, and every writer is different, characters don’t spring fully formed onto the page. The complexity takes a while to achieve, involving many re-writes building up the layers one by one. Sometime it’s as simple as glimpsing a work of art in a museum or a statue with a particular expression.

The unravelling of Beth and Albie took time to create. I wanted Beth’s secrets to seep out slowly and Albie’s dawning realisation of where he had come to in his life to be paced very carefully.

How Far We Fall is quite different than your previous novels. Obviously it diverges from the theme of motherhood to themes of revenge and manipulation, but also it focuses more on the development of the characters than the action. Was this an intentional change?

The characters and their interplay are crucial, too. Re-writing that ancient tale gave me the opportunity to look behind the facade of relentless ambition to the deep tides of grief and loss that drove Beth, and explore the pact with destiny that Albie held to, misled as he was by three unnerving sisters.

What actor/actress would you cast to play Beth and Albie?

How Far We Fall has been optioned for development as a television drama by Twelve Town, the company that produced Ian McEwan’s “A Child in Time”. I can trust to their brilliance to come up with the ideal casting!

What do you think readers will love about How Far We Fall?

Some have been kind enough to comment on the character development and the setting, which is partly in Jura in the Outer Hebrides. As Shakespeare did, I wanted to capture the grandeur of haunting Scottish landscapes. Others have liked the way the tension builds as the story unfolds.

What’s next for Jane?

The next book is evolving so I will just say it is another psychological thriller. More will be revealed in time!

Jane loves connecting with readers. You can get in touch with her at:

Thank you so much to Penguin UK for letting me read How Far We Fall in exchange for my honest review. Visit all the stops on the book tour listed on the image. 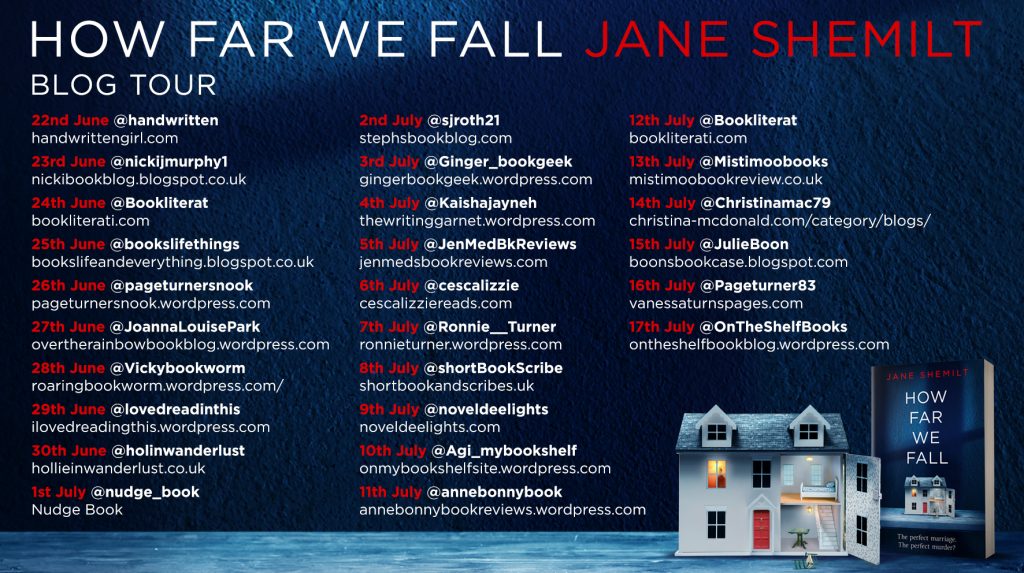