Riley Sager is the pseudonym of a former journalist, editor and graphic designer. Now a full-time writer, Riley is the author of Final Girls, an international bestseller that has been published in 25 languages, and the New York Times bestseller The Last Time I Lied. His latest book, Lock Every Door, will be published in July. A native of Pennsylvania, Riley now lives in Princeton, New Jersey.

No visitors. No nights spent away from the apartment. No disturbing the other residents, all of whom are rich or famous or both. These are the only rules for Jules Larsen’s new job as an apartment sitter at the Bartholomew, one of Manhattan’s most high-profile and mysterious buildings. Recently heartbroken and just plain broke, Jules is taken in by the splendor of her surroundings and accepts the terms, ready to leave her past life behind.

But as the days pass, strange things begin to happen at the Bartholemew. The other apartment sitters start to go missing. Jules uncovers creepy urban legends. She hears things in the apartment. And Jules begins to think her very life might be in danger.

Can you tell me something quirky about you that your readers might not know?

I am a night owl who still hasn’t quite adjusted to working during the daytime. I spent twenty years working nights at newspapers, first in college and then until I was forty. My writing would usually get done in the wee hours of the morning after I got home from the newsroom.

Now that I’m a full-time author, I try to do as much as I can during the day, but there’s something about the cover of darkness that lends itself to the plots I write about. So even though I force myself out of bed at eight-thirty every morning, there are nights when I’m writing well past the witching hour. (For instance, I’m typing this at 12:35 a.m.)

I would love to be the kind of author who wakes at the crack of dawn and writes a thousand words before breakfast, but I’m afraid that ship has sailed. I’m too set in my ways now.

Can you tell us one interesting thing about yourself?

Even though I’ve earned a bit of a reputation for writing scary things, I actually get frightened very easily. Not so much by fictional things, but by true stories or things that might be true. I can watch slasher flicks all night and be fine, but show me something about a real-life serial killer and I’ll be creeped out for days.

I avoid true crime or any real-life case that’s unresolved. Unsolved Mysteries absolutely terrified me as a child. I’m also irrationally frightened by certain urban legend scenarios. The idea of Bigfoot has always scared me, even though I have no idea why. The same goes with UFO sightings and internet-famous myths like Slender man and Indrid Cold.

Oh, and just in case I haven’t already proven myself to be a complete and utter wuss, anything involving the JFK assassination is guaranteed to give me nightmares. Again, I don’t know why. It’s possible I first learned about it from Unsolved Mysteries. Curse that show!

Did you always want to be an author?

I think so, even if I wasn’t always conscious of that fact. As a child, I loved playing pretend and making up stories. I had a huge imagination, which made me think I’d give acting a try. That was the goal in high school. Then I went to college and immediately realized I had neither the looks nor the talent for the stage and screen. But I still enjoyed telling stories, which led to writing plays, screenplays and short stories. By the time I got around to writing a book, it felt inevitable. Like it was the thing I should have been doing all along.

Oh, there’s definitely more pressure, most of it self-imposed. Honestly, it’s a bit weird to now be known as “bestselling author Riley Sager.” That adjective signifies a level of success that I don’t feel I’ve quite earned yet. Hopefully that feeling will fade eventually. But for now, I still can’t shake the sense that I need to keep proving myself. I could be the poster boy for imposter syndrome.

I was in newspapers for a very long time. I started out as an arts and entertainment reporter, then became a film critic, then an editor and designer. It was the best training ground for a writing career. I learned how to be edited by someone else. I learned how to write for conciseness and clarity. Most important, I learned how to work on a deadline. All of these skills are necessary for a long career in publishing, which is why so many great novelists hail from the world of newspapers and magazines.

I will have a Kindle with me. Solar-powered. With incredible wi-fi. That way I’ll never run out of books and won’t have to choose. 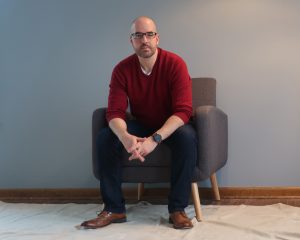 I’m very fortunate to be in the position where I receive a lot of advance copies. So many that I’m not able to get to them all. But among the ones I have been able to read, I really enjoyed The Last House Guest by Meg

an Miranda, who really knows how to spin a twisty, engaging story. I think she’s the next Mary Higgins Clark. Another one I loved is a debut—Whisper Network by Chandler Baker. It’s a brilliant book. It’s witty and angry and perfectly captures the current mood about workplace harassment.

Who’s your favourite character you’ve ever written and why?

I’m not sure she’s my favorite, but Vivian from The Last Time I Lied was the most fun to write. I loved writing her dialogue and her diary entries. She was so brash and ballsy and self-confident. I am, to say the least, the complete opposite.

I love that in your books you overlap different narratives, different characters, and different plots so beautifully and naturally. Do you plot these different strands, or do they evolve as you write? Are you a plotter or a pantser?

I’m whatever I need to be to get the job done. I know, I know. It’s such a vague answer. But it differs with every book. Sometimes I need that outline to know where I need to with each chapter. Other times, I just like to see where the words take me. 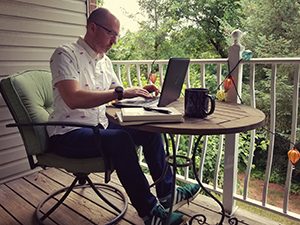 Let’s talk about Lock Every Door. Can you tell my readers a little about it, how you came up with the idea and what inspired you to write it?

Lock Every Door is about a young woman named Jules who takes a job as an apartment sitter in a famously secretive building called The Bartholomew. While there, she meets several of the building’s residents—some famous, all of them rich—and a fellow apartment sitter named Ingrid, who hints at the building’s dark past. When Ingrid vanishes in the dead of night, Jules tries to find out what happened to her, with chilling results.

I was inspired by Rosemary’s Baby, a book and movie that had a huge influence on me when I was a teenager. I loved the idea of doing something similar—innocent young woman in a grand old building with neighbors who might not be as friendly as they seem.

The Bartholomew’s elevator is a rickety gilded cage that moves very slowly. I set several scenes inside it. Some are nice. Others are not so nice. And one, I hope, has readers on the edge of their seats.

What actress would you cast to play Jo?

All three of my books have been optioned by producers and are currently in some form of development for film or television. While I don’t have any definitive suggestions for Jules, I do think we need an actress who can play both wounded innocence and kickass fighter. Jennifer Lawrence would be perfect. As would Emma Stone, Anna Kendrick and Felicity Jones.

The ending was planned in the broadest sense, in that I knew how I wanted things to be for each of my main three characters, but the detail didn’t emerge until I reached it.

It definitely evolved. I had actually planned to write Lock Every Door immediately after Final Girls. I knew I wanted a young woman trapped in a sinister building. But I couldn’t figure out how the building would be sinister. So I shelved the idea and wrote The Last Time I Lied instead.

When that was finished, I decided to return to Lock Every Door. At first, it was a bit of a struggle, because I still didn’t know what was going on in that building. Then one morning I woke up, took a shower and — BOOM — the right idea appeared out of the blue.

What do you think readers will love about Lock Every Door?

I think they’ll love The Bartholomew, which is basically one of the book’s main characters. I tried to give it a very Gothic feel, with gargoyles on the exterior and long dark hallways inside. I wanted it to be luxurious and frightening at the same time.

What’s next for Riley?

Yes, I’m hard at work on another book, which will hopefully be ready for Summer 2020. I don’t want to get into too much detail because, for me, talking publicly about a project is like letting a bit of helium out of a balloon. It’s still inflated, but it doesn’t float as much as it once did. All I can tell you is that it’s inspired by The Amityville Horror, but not in the way you might think.

Riley loves connecting with readers. You can get in touch with him at: