J.T. Ellison is the New York Times and USA Today bestselling author of more than 20 critically acclaimed novels, and is published in 28 countries and 16 languages. She is also the Emmy award-winning co-host of the television series A Word on Words, a literary interview television show, and co-wrote the “A Brit in the FBI” series with #1 New York Times bestseller Catherine Coulter. She lives in Nashville with her husband and two small gray minions, known as cats in some cultures.

Perched atop a hill in the tiny town of Marchburg, Virginia, The Goode School is a prestigious prep school, the boarding school of choice for daughters of the rich and influential.

No one questions the cruelties of the secret societies or the dubious behavior of the privileged young women who expect to get away with murder. But then a popular student is found dead, rumors suggesting she was struggling with a secret that drove her to suicide, and the truth cannot be ignored.

But look closely…because there are truths and there are lies, and then there is everything that really happened.

Tightly plotted and brilliantly executed, this story of secrets, hazing, suicides and murder is told in the most evocative way. I could practically hear the bells chiming in the bell tower, feel the chill of the old stone walls, sense the menace from the secret societies. Like Mean Girls or Gossip Girl set in a gothic boarding school, Good Girls Lie is filled with bullies and spoiled rich kids all living within the walls of an elite, all-girls school.

I’m a frustrated wanna-be architect. My favorite magazine is Architectural Digest. I love seeing how things are designed and decorated. I can build most anything, I grew up helping my dad build all our houses. But I can’t decorate to save my life. I’m missing that gene. I suppose that’s why I’m a writer and not a painter. I was always meant for a creative life, just not one that involves color and placement.

This is a good problem to have, but I do feel like there is more pressure now than when I started. I don’t know how much of it is external and how much is internal, but if pushed, I’d say that’s a 10 percent to 90 percent split in favour of internal. My publishers aren’t calling me up saying “you have to top this last book, JT. Level up. Find a new way of telling the story.” That’s all in my mind.

And as such, I don’t write the same as I used to. I obsess over elements that before were just a part of telling the story. My workload has actually decreased—I was writing two to three books a year before, now it’s only one—but it all feels much more intense. I know, woe is me, right? 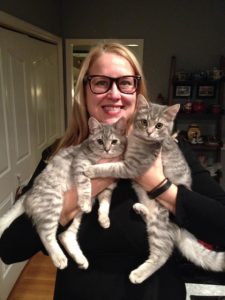 I cast about for a good while on what I wanted to be when I grew up—the usual doctor, lawyer, firefighter—but when I landed, it was International Business. I got interested in maritime law, and the foreign service, and thought that would be my path. I ended up majoring in Politics and Creative Writing, getting a Master’s in Political Management, and worked in politics for a while before transitioning to aerospace marketing.

I have a mind for the business side of writing, which is actually a curse. I have a hard time turning off the little voice that looks at how the work impacts the market instead of just being in the story. I mean, it’s great that I can handle business aspects of the job and have a sense of how a marketing and PR can affect sales, but I wouldn’t mind only being creative. There’s a certain freedom to that.

Never Let Me Go, The Silent Patient, The Stranger Inside, Daisy Jones and the Six, Ninth House, Gideon the Ninth, and Educated are all on my best of 2019 list.

It’s a toss up between Forever by Judy Blume and the Norton Anthology of Poetry. And maybe the dictionary. Definitely Encyclopaedia Britannica. I was a curious lass.

What book had the greatest impact on you?

That’s a hard question, because there are many, so I’m going to go with Mind Prey by John Sandford. When I read it, I was inspired to return to writing (after all that Education in Other Things) and it set me on my current path.

Plato – I want to discuss my theories of the cave, that it doesn’t matter if you escape it, because you’ve simply entered a new, bigger one; ergo: enlightenment can’t ever really exist.

Hemingway – He just seems like a good time, you know?

Virginia Woolf – I’d like to try and talk her out of the rock in the pocket trick.

Karin Slaughter – She’s someone I know but would like to know better, because her fearless approach to her work gives me permission to take chances in my own.

Deborah Harkness – she’s one of five people in the world who teaches alchemy, and she knows great wine. A stellar combination.

Let’s talk about your new book. Can you tell my readers a little about it?

Recently orphaned, Ash Carlisle, from Oxford, England, crosses the Atlantic to attend the elite all-girls boarding school, The Goode School, home to secrets, lies, and a very haunted history. While she fits in at first, as students and teachers begin to die, she goes from revered to reviled.

Where did you come up with the idea for Good Girls Lie?

I had an intense vision for the first chapter—a girl in a school uniform hanging from the front gates of a private school. I wrote the open as a screenplay first, just to be sure I had the atmosphere exactly how I wanted it, then found Ash’s first and last name while reading a magazine on a plane. I quickly realized the visuals of the school were based on my alma mater, and off I went. I’ve always wanted to write a boarding school mystery, and I really like the revered to reviled concept, especially in light of our current problems with cyber bullying.

What actresses would you cast to play Ash and Dean Westhaven?

A friend of mine, Gare Billings, has cast Florence Pugh as Ash, which I love. And he sees Anne Hathaway as Dean Westhaven, which I also love. In my mind, I was envisioning Blake Lively or Jodi Comer; all three actresses would bring a different dimension to the role.

Was the ending planned from the beginning or did it evolve as you wrote it? Are you a plotter or a pantser?

This book nearly got me because I had the ending—the last line—early on. My stories normally evolve; I rarely know the ending until I’m three-quarters of the way in. It was difficult writing to something and not giving things away. I much prefer not knowing until it’s staring me in the face. I trust my subconscious.

What do you think readers will love about Good Girls Lie?

The school setting, the dynamics of the secret societies and the girls, the gothic creepiness. The dean, who dreams of being a writer. And Ash herself, she’s pretty cool.

I loved the haunted, gothic feel of the boarding school, and how evocative your writing was. It made the atmosphere really come alive! Is The Goode School based on a real school or wholly taken from your imagination?

It’s absolutely based on my college, with some additions from the University of North Carolina-Chapel Hill. I met up with my high school bestie in Chapel Hill and she gave me a tour of the campus and the arboretum, which made it into the book immediately. I didn’t have that element until I went to North Carolina, and it’s very important to the story.

What made you decide to focus on a gothic school, secret societies, and the bullying and hazing some teenagers have to go through to fit in?

Honestly, I’d always wanted to tell this story, and when I realized I had a short amount of time to write this book, I decided to forge ahead. These elements were known to me, enough that they took the least amount of research! I loved revisiting my school years, and certainly tossed in a few real-life experiences. I was in a few secret societies…though none were quite as intense as Ivy Bound.

You have such a gift for creating compelling characters and weaving multiple narrators through your stories, and this is so apparent in Good Girls Lie.  How do you build characters that are so easily identifiable?

That’s so kind of you to say, thank you! I love building characters and I do it layer by layer. I always ask them a single question to start – what’s your biggest shame? Once I know what they’re trying to hide, the rest falls into place. I think we all wear armour. Just like you’d get to know a new friend, you have to take it slow, not trust right away, let them reveal themselves over time. I write about people I’d like to hang out with or would find terrible to be around. It’s a simple formula for character building.

I’m working on a story about a destination wedding that goes very, very wrong. It has very loose Rebecca overtones, and that’s as much as I can say right now. It’s called Her Dark Lies. It’s my late 2020 or early 2021 book.

J.T. loves connecting with readers. You can get in touch with her at:

Want to hear more from J.T.? Sign up for her newsletter for the latest news, updates and book recommendations, plus you’ll get a FREE ebook when you sign up.