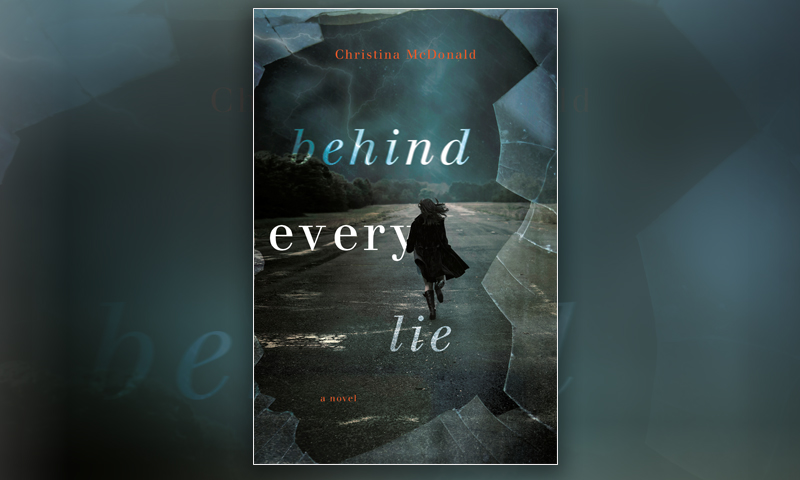 Eva Hansen wakes in the hospital after being struck by lightning and discovers her mother, Kat, has been murdered. Eva was found unconscious down the street. She can’t remember what happened but the police are highly suspicious of her.

Determined to clear her name, Eva heads from Seattle to London—Kat’s former home—for answers. But as she unravels her mother’s carefully held secrets, Eva soon realizes that someone doesn’t want her to know the truth. And with violent memories beginning to emerge, Eva doesn’t know who to trust. Least of all herself.

Told in alternating perspectives from Eva’s search for answers and Kat’s mysterious past, Behind Every Lie explores the complicated nature of mother-daughter relationships, family trauma, and the danger behind long-held secrets.

Read the first chapter below and then mark it as Want To Read on Goodreads for chances to win advance copies!

What have I done?

The thought charged at me, stark and unrelenting. Blood was everywhere. Under my fingernails. In my mouth. In my hair. It was streaked across my shirt. On the floor, it blackened and congealed, filling the air with its metallic breath. The sickly sweet scent clung to the back of my throat.

My mother was slumped on the floor in the living room, mouth gaping, brown eyes staring at nothing. A dark pool of blood seeped like molasses from a gaping wound at the base of her neck. The urgent beat of her pulse had faded to an unrelenting nothingness.

Both my hands were clamped around her throat. An emotion thudded so viciously in my chest it was painful, like searing.

But only a choked sob came out.

Hail clattered against the windowpanes. The wind thrashed against the house like the sound of an animal howling. The living room lights flickered and darkened. A flash of lightning illuminated a bulky shadow on the other side of the room. Fear, salty on my tongue, shot through me like an electric pulse.

Suddenly I was outside, the night sky pressing on my skin.

The burning scent of ozone scorched the fine hairs of my nostrils, mingling with the pungent scent of wet earth. Black and purple clouds roiled in the night sky. Thunder rumbled ominously. The air crackled with electricity, static lifting the fine hairs along my bare arms. Rain skidded into my scalp, licking at my face.

Tears mingled with the rain on my cheeks as I ran. I was crying so hard I could barely breathe. I skirted the perimeter of the elementary school and pounded toward the park, passing cars parked neatly along the curb. In the distance, a metal statue, the Seattle skyline just beyond.

There was a massive boom, an explosion as I drew level with the statue. Then only light was all around me, inside me, crashing against my retinas, hissing along my nerves, an explosion inside my organs.

Then only light was all around me, inside me, crashing against my retinas, hissing along my nerves, an explosion inside my organs.

I fell to the ground spasming, crippled with pain. Fire engulfed me from the inside, every nerve ending flayed open. A blistering fizz roiled through me. I was no longer in control of my brain or body. They had cracked into a million pieces.

And then there was nothing.

In the distance, a chilly morning wind whipped off the waters of Saratoga Passage, kicking the waves into frothy tips. The snowcapped Cascade Mountains rose in the distance. Scarlet and gold leaves licked the coastline along Whidbey Island. There were no rain clouds yet today, the promise of a crisp fall day held out like a gift.

“My hero,” I teased. “I just need to get you a little black hat and you can be my chauffeur.”
Liam reached into the backseat and grabbed one of the black baseball hats his builders wore. He put it on and grinned. “Your wish is my command, my lady.”

He brushed his lips against mine, pulling me tight against him so I smelled the lush, expensive sandalwood and citrus scent he wore.

“I’m only going to work.” I smiled against his lips.

“I know, but I want more of you, Eva Elizabeth Hansen.” His blue eyes danced as he slid his hands lower down my back.

I laughed and pulled the baseball hat off, running a hand through his hair. It was still thick and sandy blond, not a strand of gray, even though he was more than ten years older than me.

“Are you working in Seattle today?”

Liam was a successful property developer with offices in Seattle and here on Whidbey Island. He spent most days in meetings, elbow-deep in profit and loss reports and zoning ordinances, or driving to and from property sites.

“No, I’m here. I have a meeting in an hour, but I’ll be at our new site over in Greenbank after that. My builders got the structure up for the new strip mall so I need to take a look at it before the inspector comes by later this week.”

I raised my eyebrows. “That was fast. I thought you said you didn’t have the building permit yet?”

Liam shrugged. “It’s just a technicality. I know they’ll approve it. Just sometimes the bureaucracy takes time to wade through.” He straightened his navy tie and glanced at his watch. “Don’t worry. I’ll be here to pick you up after work.”

“I have that dinner with my mom and brother tonight, remember?”

“I thought we were going to that Thai place you love over in Coupeville.” Liam said it in that way he had: a statement, not a question.

“No, that’s tomorrow.” I hesitated, unsure of myself. “Right?”

Liam showed me the calendar on his phone. “It’s today.”

“Oh God, I’m so sorry!” I clapped a hand over my mouth. “I totally messed up! Remember I told you my mom won the Seattle Medal of Courage? Andrew organized this dinner to celebrate. . . .” I bit my lip. “Should I cancel? Maybe I should cancel.”

“No, you should go. You wouldn’t want to disappoint them.”

“Why don’t I go with you?” His face was expectant, hopeful.

I froze. “It’ll be boring,” I said carefully. “Besides, my family is weird.”

He laughed. “Aren’t all families weird?”

Liam knew better than most how weird families could be. He’d grown up so poor his dad kicked him out at sixteen, telling him he needed to fend for himself. I was sure that sort of rejection would have laid me flat on my face, but it didn’t seem to bother Liam. He said it had just made him strive harder to succeed.

“I’ll introduce you soon. I promise.” I looked at the time on my phone. “I’ll see you at home later, okay?”

I loved saying that. Home. After dating for a year and a half, I’d finally moved into Liam’s house. My princess-cut diamond ring winked in the morning light. Slowly but surely my life was coming back together. A large part of that was thanks to Liam.

I leaned across the console and kissed him good-bye. “Love you!”

I headed up Langley’s main street, a charming combination of antique shops, independent bookstores, eclectic boutiques, and art galleries. Town was quiet, the tourists gone now that fall was here. I hunched in my favorite green corduroy coat, a dreamy vintage style with a belted waist and buttoned front. I shoved my hands into wide flap pockets, my boots clicking sharply against the pavement.

My neck suddenly prickled, the feeling of someone’s eyes on me heavy and hot. Something moved in my peripheral vision. I swung around to look, but there was nobody there. The American flag on the tavern at the end of the road flapped in the wind. Across the road, an elderly couple walked hand in hand along the sidewalk.

I scanned the road, the familiar feeling crawling over my body. I closed my eyes and breathed in. Nobody was there. Nobody was ever there.

I scuttled down the quiet lane to the Crafted Artisan, the art gallery where I rented space to paint and sell the clay pottery I made. Mostly dishware, pots, and vases. My favorites were the special requests from customers who stopped by the gallery with a piece in mind.

The bell over the door chimed as I entered. The gallery was small but brightly lit, with glossy white paint, black tiled floors, and varnished redwood accents. A wall of floor-to-ceiling metal shelves holding colorful ceramics lined one wall; another featured a collection of glass mosaic works.

The owner, Melissa, was standing in the middle of the gallery. She held a dark-green vase with a crackle glaze that looked like it had been broken. An intricate web of gold beads filled the cracks. Her blue-black curls were wild around her round face, dark eyes winged with black eyeliner and coated in mascara, a slash of red lipstick on her mouth.

“What’s that?” I asked, slipping my coat off and stuffing it under the cash register desk.
“I met a woman on the beach in San Diego this summer and we got to talking. Turns out she’s an artist. She makes the most beautiful pieces, so I offered to display her work.”

I smiled. Melissa was one of those über-friendly types, like a hairdresser or one of those women in the makeup department at Macy’s, someone people told their secrets to without meaning to. She liked people, and they liked her. She’d become a good friend since I’d moved to the island, even if I still couldn’t bring myself to tell her the whole truth about my past.
“Look at the detail! She wrapped each broken piece in fabric, then used these beads to patchwork the pieces together. It’s based on kintsugi.”

“It’s a Japanese art. The artist fixes broken pottery by filling the cracks with gold. Usually they use epoxy to glue the pieces together. It’s supposed to highlight the damage instead of hiding it.”

I lifted the vase from her hands and examined it. “It’s beautiful.”

“Oh, by the way.” She reached behind the cash register and handed me a flyer for an art exhibit in Seattle in the spring. “You got mail.”

“Thanks.” I glanced at the flyer and dropped it in the garbage.

Melissa shook her head, one hand on her hip. “Why do you do that? You could totally get your work shown there!”

“Melissa, these are trained artists. They’ve been doing it their whole lives. I only bought my kiln and wheel a few years ago. My little homemade pottery can’t compete.”

“What is it going to take for you to just trust in yourself a little?”

She plucked the flyer from the trash and thrust it at me so I had no choice but to take it.

But I knew the truth: I couldn’t trust myself at all.

Want to keep reading? Mark Behind Every Lie as ‘Want To Read’ on Goodreads for chances to win advance copies!